The Lure of the Triple

Like a Siren on a rock, the Triple woos me with her beauty.

Last night at my weekly softball game, I could not resist her Song.

With a runner on first and one out, our beer league team getting a heavy beat down of 9 – 0, I came to the plate with a chance to start the rally that could help us claw back.  As a left-handed hitter, and all of five-foot-three, it’s pretty common that I look to left-center and see the outfielder standing there a bit too tall.  Clearly, from his angle, this little speck of a human who bats from the left side can’t beat him deep.

From the third base coaching box, my friend Ben offers a sort of code phrase that we’ve come to understand over the years.

“Wiffle Ball,” he says, his voice hidden beneath other commentary from their fielders and our dugout.  “Wiffle Ball.”

Not that any of them would even know what that meant.  But I do.

He’s referring to my ability to punish a Wiffle Ball.  Truth be told, I have not the power of almost 90% of the people that walk onto a normal field with normal bats..  But holding a Wiffle Ball bat, lighter than Joe Jackson on his feet, I have a mechanical swing that allows me to send that hallowed white ball soaring into any blue sky.  I generate power through a quick strike as best I can.

So when he says “Wiffle Ball,” I check the fielders. And there he is. Left center field. I can practically reach my bat out to push him back. But why would I do that? He’s given me this opportunity.  All I need to do is conjure up that swing.

On the third delivery, I get my pitch. The yellow ball falls over the outside corner, belt high. I take a deliberate step towards the plate and put my best charge into it.

The second it leaves my bat, I know the result…

I know it’s over his head and in the gap.  I wheel on my feet and accelerate towards first base.  As I dig in and speed towards first, I glance at the outfielder. It is then that I see my favorite sight as a hitter.

And almost immediately, the Siren whispers in my ear:

I hit first base at full speed and make the turn. With bouncing eyes, I take quick note of my chances.  The outfielders are still chasing.  Will, the only guy on the team who could smoke me in a sprint, is already on his way to third. He’ll score easily, leaving a vacancy on that white square of safety on the third base line.  A thought occurs to me: an RBI double is sexy too.  Just ease up and….

I turn it on. I hit second and the wheels are spinning, my feet turning up the dirt as I dig hard for my beauty.

The outfielder has collected the runaway object.  Last thing I see before I eye my prize is him planting to hit the cutoff man.

“THREE!” his teammates are calling.

“Ball comin’!” yell my own comrades.

I see the third baseman positioned well past the bag, on the outfield side.  Somewhere in all of this, I hear a voice from this morning, from my drive to work, from the MLB XM station.

“He did that hook slide… you just don’t see that any more… and that’s why he was safe.”

Yes. Hook slide. Hit the side of the bag closer to home plate, don’t give him my lead leg.  I leave my feet, my right leg out to my right, and my left leg tucked beneath my body.  The tag hits my upper thigh of my right leg as my toes connect with the bag, the Siren’s rock. I look to the home plate umpire, my arms flapped out to the side, helping him make the easy call.

But only one of his hands follows suit.  “Haaaah!” he growls, pumping his fist.

“AAH!” I protest, my palms turning upward in the COME ON! posture.  Ben looks down at me, shrugging.

And then, like a former lover who spites you, she reminds me of the sudden pain on the surface of my left leg.  You fool, I think.  So hell bent on the Triple you forgot you were wearing shorts. 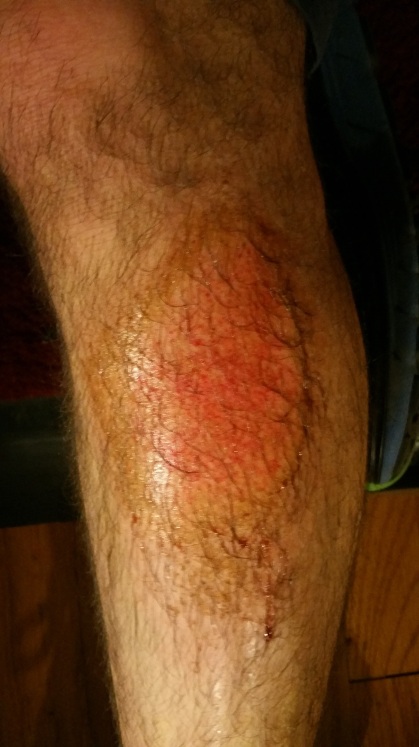 My shower last night involved a lot of punching the wall as the water washed over my wound in a bitter sting.  I walked around work today limping, the bandage protecting me but the motion pulling on my skin.  My wife wasn’t thrilled, but she’s getting some good laughs out of it. My cat doesn’t seem to notice as he rubs my pant leg where only it would make me cringe.  And my 7-month old son has no idea why it’s harder to wrestle around this evening as we usually do.

A normal slide, where I’d hit my backside and hip area to pop up cleanly, has been accomplished many times while wearing shorts.  The hook slide though.  Don’t think I’ll try that again.

That damn Siren.  The Triple.

The box score says RBI Double.  The Double may not be the Siren, but she sure soothes the heartbreak and the pain.

This site uses Akismet to reduce spam. Learn how your comment data is processed.